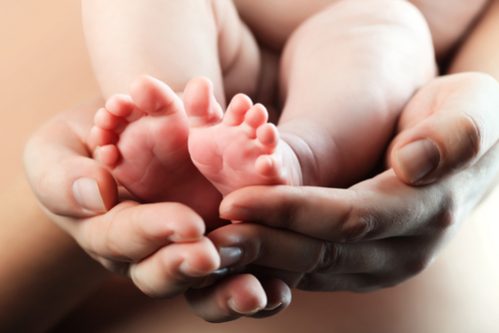 I had a vision in my head of how it was going to be when I brought my beautiful baby girl home. I would be wheeled out of the warm and fuzzy maternity ward with Lily in my arms and balloons on my chair. My husband would be waiting with the car. I would be all consumed in my happiness and joy, oblivious to anyone and everything else.

Diabetes got in the way.

After my C-Section at 1:23PM, things got a little hazy. I woke up in a recovery room at about 6PM, being informed by multiple doctors that I would need 2 blood transfusions the next day. My baby had been sent to the NICU; her blood sugar had plummeted when she was born, being unaccustomed to relying on a fully functioning pancreas. She made a quick recovery after my husband immediately fed her, but they kept her in the NICU for observation.

As we decided on her middle name and he showed me pictures from the NICU, my husband and I tried our best to focus on the positive: we had a healthy, beautiful, complication-free infant waiting for us to take her home in a few days. However, I was devastated. I was also apparently still under the influence of medication and very tired, because the next thing I knew it was the morning. I had my first blood transfusion, counting the seconds until I was done and could see Lily. Then I had my second one. All the while I was on the post-surgical floor, battling insane blood sugar highs and lows and trying to figure out a new non-pregnant basal rate. I was far from the warm, cozy, pink and blue maternity ward, and even farther from the NICU.

That night I was finally wheeled to see my girl. I fed her. I held her. I rocked her. I changed her teeny tiny diaper. Then I had to leave, and I cried. She was stable, but one more night of observation was required, and possibly one more full day.

I was lucky, surprised, and overjoyed when she was wheeled into my room. There was no fancy baby crib in my room like the maternity rooms, but I just wanted her in my arms anyway. The nurses had no formula for me to feed her, but I barely noticed as they scurried away frantically; I was focused on gazing at my Lily. No maternity nurses were there to answer my questions, and no one was there to help with breastfeeding. That was an unrealistic option anyway; it would make my hormones, and consequently my blood sugar, go even more haywire. My situation was not ideal, but I had my baby, and that was all that mattered.

Leaving the hospital the next day was almost comical. The nurses called for a wheelchair and my husband went to get the car. I felt like this was going to be my “normal” maternity moment. But 45 minutes later, we still had no maternity wheelchair; apparently, the request for one on the post-surgical floor had confused lots of people. My husband was calling every 5 minutes, worried he would have to move the car soon. I had zipped up and unzipped the super warm sleep sack/coat on my January infant at least 4 times. And I had had it. This was OUR first mother-daughter moment and I was not going to let my health complications get in the way of it.

So, I zipped up my Lily, I buckled her in her carrier. I put on my coat. I left the flowers and balloons in the room. And I walked myself to the hospital entrance where my husband was waiting.

Did my C-section incision ache? Yes. Did I stop 5 times on the way down because I was weak. Yes. Did my husband yell at me when he saw me walking toward him with the carrier in my hands. Yes. Was it worth it? Yes.

A mother (diabetes or not) often discovers how strong she is when she is defending and loving her child. It was that simple and it was the start.

2 thoughts on “I Delivered My Baby… And Then Diabetes Arrived”