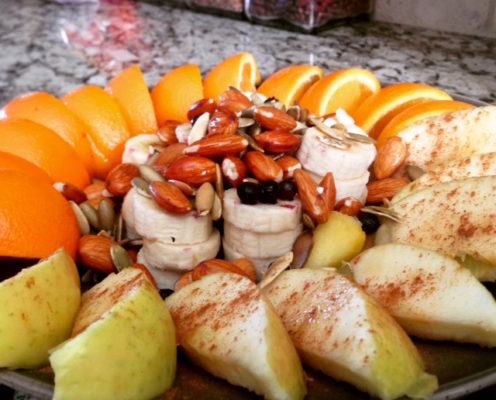 It’s Saturday. I look around my kitchen like, “How many nutrients can I pack into one meal?” The kitchen counter holds the answer: fruit. A meal based on the classics: oranges, apples, and bananas. The excitement mounts… but simultaneously, the anxiety builds–how can I balance that many carbs? Instead of running in fear from the carb-load, I decide to embrace it, count it, and ride the wave of a high-carb, plant-based diabetes meal.

There’s always a backdrop to any diabetes situation. How much exercise is in the system? Where did your blood sugar start? Well, I started with a BG of 118. Did 30 minutes of yoga prior. With exercise in the system, I feel more prepared. Exercise is the secret weapon.

Estimated carb total of 150. I dial up 5 units of Novolog, injecting it 10 minutes prior.

Days prior, I began the Dexcom life (and love it). While eating, I watch the watch. About 15 minutes into eating the meal, a rise in the BGs is noticeable. 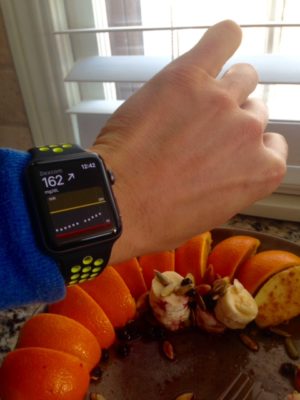 Slowing the pace, I shift toward eating the almonds and pumpkin seeds, allowing the insulin to catch-up and waiting for a plateau of the sugars. Then as I saw the BGs plateau around 170, I resumed eating the second half of the meal. About an hour later, the sugars had settled into a nice zone in the low 100s.

Lessons learned include taking a pause during the meal if you see a rapid rise in levels. This was not a strategy available to me before the CGM, and with the watch, it certainly helps keep tabs on the meal’s progress into the system. I knew that I had the right amount of insulin onboard, being just a matter of time before it overtook the first wave of sugars. (Shoutout to Dr. Stephen Ponder, the founder of Sugar Surfing)