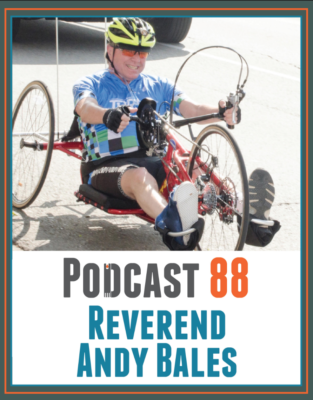 Reverend Bales story was one I could not pass up. While many of us living Type 1 diabetes quarantined, he hit the front line to serve the homeless community on Skid Row. He has lived with T1D for 48 years and hasn’t let this disease keep him from achieving his goals both physically and professionally. He is truly a hero!

Since the winter of 1985, when Andy preached a message to his students about the importance of feeding hungry people and never turning your back on a hurting person 6 times on a Friday, only to not practice what he preached when a hungry man asked him for his sandwich while Andy working a 2nd job on the weekends.

Since then, Andy has been haunted by the thought of leaving one precious human being on the streets. He use to look through people digging out of dumpsters or living on the streets but immediately, that “haunting” turned into action, as Andy has led four non-profits addressing homelessness in Des Moines, Iowa, Pasadena and now at Union Rescue Mission of Los Angeles.

Andy and wife Bonnie have 6 children, 7 grandchildren, and have helped parent 25 foster children throughout the years.