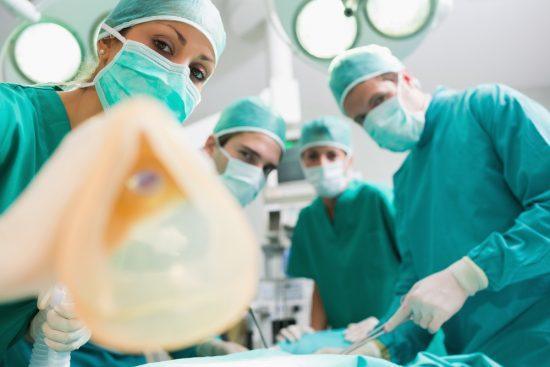 Live readings of serum glucose, tracking along on a touch screen panel–essentially a bigger, more accurate version of a continuous glucose monitor. A vial of straight glucose ready to put into the IV line. The ability to keep the glucose levels in perfect range. Insulin ready to infuse.

This was my vision of surgery for a person with diabetes. Did I know better than to expect this? Sure, I’ve spent time in the OR. Watched anesthesiologists work. I’ve never seen a blood sugar monitor live. Just figured it may be right there on their dashboard, tracking alongside blood pressure. This is 2015… I mean 16, right? Yes, it is. Yet, given the documented inaccuracy of current CGM technology, it’s not quite trustworthy enough for the operating room, or even that valuable. After all, the majority (albeit shrinking majority) of the country can take down half a Hot-n-Ready Little Caesar’s pizza and keep their blood sugar under 150. It’s just not needed.

A week ago, I chose to have surgery to release a Dupuytren’s contacture (hand operation). After arriving at the hospital, signing the consents, and receiving the first hospital bill at 5:50AM, the anesthesiologist arrived to talk about the gameplan. He asked about my diabetes management. I told him about the pump and the CGM. Instantly, he commented with some excitement, “Do you mind if I watch that during the surgery?”

“Sure”, I responded, with some surprise given this contrast from my initial anesthesiology vision. Together we quickly went through the basics of accessing the number and off we went to surgery. (Side note: apparently, they usually test sugars 3-4 times while the patient is under with a meter. This feels primitive.)

After what always feels like a single blink and simultaneously a glimpse at eternity, I awoke in the recovery room, feeling about how one expects. Not long after awaking, the anesthesiologist stopped by to rehash the surgery. “About thirty minutes in”, he explains, “your pump started going nuts. So I looked at it and it said you were at 62.” That’s when he busted out his meter and pricked my finger to a reading of 43!

Right about here was pretty surreal. I’m 10 minutes out from under, still on another planet, and this doctor is talking about using my CGM. Feeling calm and detached, I think, “Glad I made it out of surgery. 43 is pretty low. Good work CGM.” He ended up administering IV dextrose and retested it later. Can’t remember what it was then but it was better. He stopped back by in the 2nd recovery area to make sure that he hadn’t given too much dextrose. When I checked the CGM, it read 145. This guy corrects lows better than I do.

2 thoughts on “What Actually Happens When You Go Under Anesthesia”